The journey into Petra took us through narrow, winding, redrock slot canyons that looked exactly like the ones at home. Then my breath caught in my chest as the canyon opened up and I caught my first glimpse of Petra. 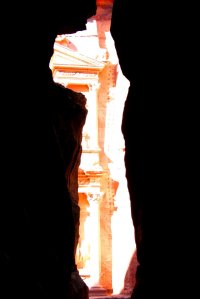 There are some places that you expect you’ll get to sometime in your life: California, maybe Canada, some of the eastern states, and hopefully Europe at some point. Then there are other places that you dream of but never expect to actually visit. Petra is one of those places. As a little girl I read the encyclopedia for fun, so I’ve read about Petra my whole life. But I never imagined that I’d go there!

So what is Petra, exactly? It’s a city carved out of the canyon by the Nabataeans, a desert people that lived during Roman times. Petra was along the King’s Highway, an important trade route, and so the Nabataeans were wealthy traders. The entire canyon of Petra is filled with the temples, dwellings, and hundreds of tombs carved out of the cliffs. In its heyday, Petra was home to thousands of people.

Look! Indiana Jones! Along the bottom of the canyon is an ancient Roman road, or cardo. This building is the first that you pass along the cardo; it’s called the “Treasury”

You can’t tell in this photo, but on the canyon wall behind us there are dozens of little tombs carved out of the rock. 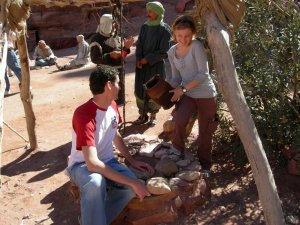 “I’ll fetch water for your camels, too!” In Old Testament times, the well was definitely the place to meet.

We got to spend most of the day just exploring Petra on our own, so I hiked up to the “Monastery” a few miles up the canyon

There was only a little time left before I had to catch my horse ride out of the canyon, but I really wanted to go up to the High Place, an ancient Nabataean altar where they performed animal and human sacrifice. So I paid a Bedouin guy $5 to borrow his donkey, and Madison and Dave and I high-tailed it up to the High Place. In some places the trail was really steep! And there were long drop-offs on the side! Riding a donkey up to an ancient sacrificial altar in Petra is definitely in my Top Ten Life Moments. 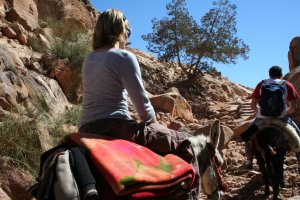