Happy Purim, everyone! Purim is one of my very favorite Jewish holidays for the following reasons:

1. It memorializes the beautiful queen Esther whose bravery saved her people, and it commemorates the Jews’ deliverance from death and their victory over the jealous Haman. Esther’s story has always been one of the most beloved to me.

2. Everybody gets dressed up in costumes for Purim! 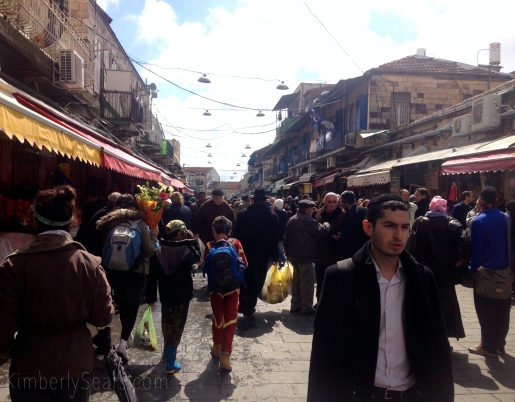 Two boys in costume, one dressed as Ironman and the other as an army soldier, walk down a street of Mahane Yehuda, the Jewish Market. Every year Purim costumes become a little more Americanized. Mark took this photo.

The Book of Esther tells us that after the Jews were spared from death and their would-be exterminator Haman was slain, they instituted a holiday on the 13th and 14th days of the month of Adar (Purim is celebrated one day later, on the 14th and 15th, in walled cities such as Jerusalem). The first day of the holiday is observed as the fast of Esther to remember when Esther and all her people fasted before she dared come before the King Ahaseurus and make her request to him. The next day is the celebration of the Jews’ deliverance.

When is the month of Adar, exactly? The Jewish calendar is lunar and lasts 354 days; in a normal non-leap year there are twelve months of 29 or 30 days. This means that Adar and Purim always fall in February or March. Because of the deliverance of the Jews from Haman, Adar is considered the happiest month of the Jewish calendar. Thus every leap year, when an extra month is added to the calendar, there is a second month of Adar.

While accepted as scripture by Jews and Christians alike, the Book of Esther does not actually mention God’s name—not even once. But his hand can be seen in the story of the deliverance of Esther and her people and so it is said that he is “disguised” in the story. For that reason, many Jews celebrate Purim by donning disguises; instead of the usual somber black apparel, you can walk down the streets of West Jerusalem and see young people wearing Halloween-like costumes (and showing more skin than I’ve ever seen in the Holy Land).

Purim tradition also includes attending synagogue to hear the reading of the scroll of Esther (the Megillah). Every time Haman’s name is read, everyone boos or shakes noisemakers to drown out the sound of Haman’s name. Another traditional Purim observance is drinking wine until you are so inebriated that can no longer distinguish between the phrases “Blessed is Mordecai” and “Cursed is Haman” (yes, really!). After all, if it were not for the banquet and the wine that Esther prepared for Haman and the king, the Jews would not have been saved!

Mark and I loved spotting and snapping photos of everyone in their Purim costumes! Purim may well be the most lighthearted of all Jewish holidays. Chag sameach! 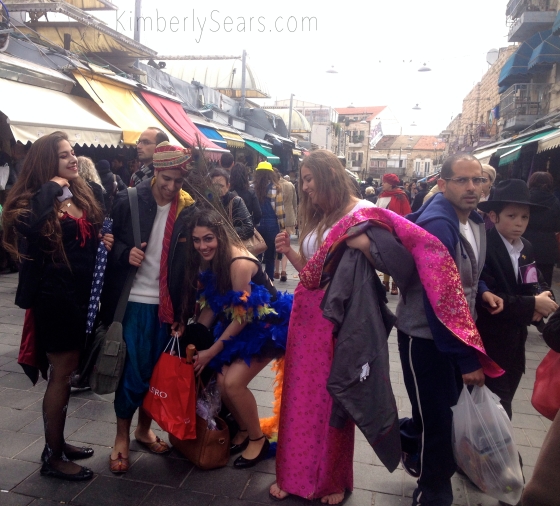 Israeli youth sport their none-too-conservative Purim costumes while a man and an Orthodox boy hurry past on a street in Mahane Yehuda.

Evan is home from Germany! I’m so glad to have my smart, tough, hilarious, handsome, quirky brother home again.

On Saturday Logan, Evan, and I took the little kids (minus Violet) to hike to the Y and watch the Stadium of Fire fireworks. We stuck Julia in the baby backpack and Evan carried her. About halfway up she said, “Hiking makes me tired. I need to take a rest on your shoulder, Evan.” Yep, life’s tough when you’re two years old. 🙂 Also, we brought Natalie’s friend Megan with us, and Julia called her “Bacon” the whole night. Megan, Bacon…they’re interchangeable, I guess.

I hiked Maple Mountain for the first time with my brothers last week. (Yes, I’m a little ashamed of myself that I’ve lived in Springville almost half my life and had never climbed it!) We made pretty good time–we started hiking at 6:00 and summited by 9:15. Then we were back off the mountain by 11:00, so I still had time for a half day of work. Maybe I should hike Maple Mountain every day.

This week should be an adventure. Logan, Evan, and I are going to make an attempt at Gannet Peak, which evaded us last year because of terrible blizzarding weather. I hope we get a chance at the summit! Gannett is Wyoming’s state highpoint and is considered the second-most-difficult state highpoint (after Denali, of course!). I hope I’m ready for this. 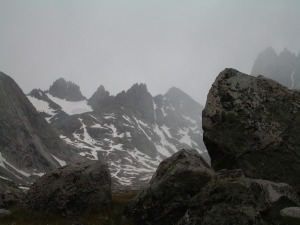 I went to Samantha‘s bridal shower with my mom last week. Samantha has been one of my best friends since I moved to Springville and I’m so excited for her and Brandon (and I really really hope I can make it back to Springville in time for their reception on Saturday!). The funniest moment of the bridal shower was when Samantha pulled a beautiful framed picture of the Manti Temple out of a bright pink Victoria’s Secret bag. “Sorry! That was the only bag I had to wrap it in!” said the lady who had given it to her.

So, life is good. I exchanged e-mail addresses with a potential Jewish genealogy client at the FHL last week (if any of you guys have Jewish friends interested in genealogy, please direct them to my website), hung out with my awesome friend Jana, coerced BOTH my brothers into bearing their testimonies in sacrament meeting, had a good lazy Sunday with my family, cut Wendell’s hair today and didn’t make him look terrible, and went running a LOT. 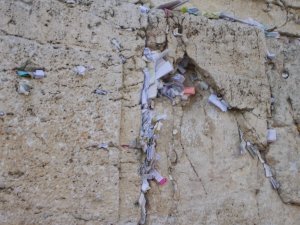 As the sun begins to set over Jerusalem on Friday afternoon, a feeling of impatience falls over the city and an air of hushed excitement falls over our group. We are going to the Western Wall to see the Jews welcome in Shabbat.

We enter the Old City through Lion’s Gate. The streets are barely wider than a car, so we press against the wall as cars come through. All the Palestinians are going home for the day, some to homes within the Old City and some to homes outside. The vendor of every shop that we pass is anxiously packing up his merchandise. Everyone is trying to close before the Sabbath at sundown. All the Orthodox Jews pass us quickly on their way to the Wall; some are almost running. No one wants to be late.

Contrary to popular belief, the Wall is not actually a remnant of the temple. It is a remnant of the retaining wall built to support the large temple mount where the Herodian temple sat. We arrive, and Wall is already packed with people.

The area near the wall is fenced off into two separate sections: men and women. As we enter into the women’s side, everyone is greeting friends and family. We crowd in, and some women are singing and dancing, while others are holding their Hebrew prayer books and rocking back and forth as they pray. One singing group welcomes us in. We don’t know the words, but we clap along and then later we join hands and dance with them (we don’t know what we’re doing, but we try our best to fake it). The whole time, we are careful, like the Jewish women, not to turn our backs toward the sacred Wall.

I go to touch the wall itself; it takes about ten minutes of waiting because the crowd is so dense. Hundreds of Jewish women press their faces against it as they pray. Finally it’s my turn; I touch the cold stone and think of all the prayers that have been uttered there. I say a quick prayer of gratitude to be in the Holy Land, then leave the women’s section to go watch the men (walking backward the whole time, of course!).

The men are having a very different experience. Their side of the wall is bigger, but much more crowded–there is hardly standing room for everyone. And their celebration is much livelier. The men sing loud songs in Hebrew to welcome in the Sabbath. Then they form circles and begin dancing. And things get even rowdier from there.

In the circles, three men link arms and spin around the circle as fast as they can (one frail-looking old man looks as if he’s about fly away!). Other men wave their arms and shake them–I am absolutely serious–like Tevye in “If I Were a Rich Man.” The rest of the men in the circle jump up and down, clap their hands, and sing louder than ever. The rule about not turning your back to the Wall definitely does not apply on the men’s side!

As the other girls and I watch from behind the fence, the Jewish men welcome in our guys completely. The old men and the young men, the most Orthodox and our American boys, dance and sing together. This is not a show put on for tourists; they are sincere in their fervor. They are expresssing complete joy in welcoming Shabbat. As I watch them, I feel an overwhelming sense of brotherhood (and a twinge of jealousy).

Maybe on other days of the week, the Western Wall is a wailing wall, as it is commonly nicknamed. But on Friday night, it is a place of excitement and celebration. The Jews are welcoming in the Lord’s day with complete joy and reverence–not quiet reverence, but worshipful reverence nonetheless.