Six years ago I spent four months living in the Holy Land, in Jerusalem. To be more precise, in East Jerusalem, the part of the city that is backed by Palestine’s West Bank. During that time I got to travel all over Israel, Palestine, Egypt, and Jordan.

Here is an excerpt from my journal entry six years ago, when I visited Jordan:

“On our first day in Jordan we crossed the border and then went to Bethabara, also known as Bethany, where John the Baptist baptized the Savior. I touched the water and picked up a flower and put it in my scriptures in the Matthew account.

“We went to the top of Mount Pisgah, the highest part of Mount Nebo. I’m so glad we got to go! Mount Nebo was something I’ve wanted to do my whole life…There was a huge rusty modern art sculpture of the brazen serpent on top. We read the scriptural account…Then we read—this is my favorite part—the account of how Moses ascended Mount Nebo before he died, and the Lord showed him all the land of the inheritance of his people—all of Canaan, all the way out to the sea—that Moses would never enter. When we were up there, I could understand why the Lord would bring him to the top of Mount Nebo. We were above everything, and we could see everything: the whole land of Canaan. Spread out at our feet, shining in colors of green farm fields and purple brown hills and gray water and blue horizon. I wonder how Moses felt as he looked down upon the land that had been promised to the children of Abraham and Israel for generations.”

So many faithful people, like Moses, never get to set foot in this Holy Land. How did I get so lucky to live there? To wake up to the call to prayer every morning and to spend my days walking that ancient sacred land…why was I thus blessed? I don’t know. But I will be thankful all the days of my life that I was. 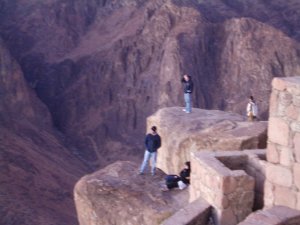 Sinai is exactly what you’d imagine it to be: dry. We drove for hours over sand dunes and flat ground so barren that not even sagebrush grew there. Once we had left behind all other human civilization, the flat dry ground turned to rocky and mountainous dry ground.

Mount Sinai and the eminences surrounding it are rugged and jut out of the earth. We set out at 3:00 AM to summit Sinai to watch the desert sunrise. Because we were hundreds of miles from any town or city, the stars were more abundant than I have ever seen them in my life; the whole sky glittered.

Along the trail, we were met by dozens of bedouin merchants who had gotten up in the middle in the night in hopes of making some money from us. “Camel? You need camel? Camel to the top?” “Coffee! Tea! Chocolate! We have!” “Need flashlight?”

The last half hour of the hike was up steep stone steps to the summit. We reached the top just as the first light was appearing over the horizon. I left our big group of students and went with a few friends to the edge of the cliff; we watched the sun rise in silence, then sang a few quiet hymns, including “High on the Mountain Top” and “For the Beauty of the Earth.”

We watched the sun slowly turn the deep blue of morning to its orange glow. I thought of Moses leading his people out of Egypt, and the great miracles that the Lord did for the Israelites. I thought of Brigham Young and my pioneer ancestors, and the great things that the Lord has done for me. Moses spoke with the Lord here more than three thousand years ago, I thought, and his covenant with Abraham is even older than that. But it still applies to me, and someday it will apply to my children, and theirs… To quote a favorite hymn:

The Lord’s promises are being fulfilled in our day. That is why the most beautiful, breathtaking sunrise I’ve seen is on Sinai. The Lord is the light of our souls, and his promises and blessings are sure.