Whan that Aprille with his shoures soote
The droghte of Marche hath perced to the roote,
And bathed every veyne in swich licour,
Of which vertu engendred is the flour;
Whan Zephirus eek with his swete breeth
Inspired hath in every holt and heeth
The tendre croppes, and the yonge sonne
Hath in the Ram his halfe cours y-ronne,
And smale fowles maken melodye,
That slepen al the night with open ye,
So priketh hem nature in hir corages:
Than longen folk to goon on pilgrimages,
And palmers for to seken straunge strondes,
To ferne halwes, couthe in sondry londes;
And specially, from every shires ende
Of Engelond, to Caunterbury they wende,
The holy blisful martir for to seke,
That hem hath holpen, whan that they were seke. 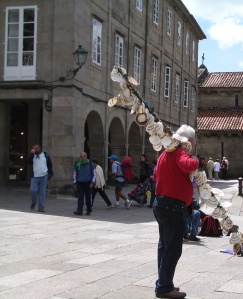 After the remains of Saint James the Apostle were discovered–Queen Helena style–in this little Galician village in the ninth century, it became a booming pilgrimage site. In fact, at its height in the 1300s, Santiago surpassed Jerusalem and Rome in the number of Christian pilgrims who visited it. There were many different pilgrimage routes to the town–“caminos de Santiago”–but all led to the same place. Christian pilgrims who made it all the way to their destination, at the far end of Spain, near the Galician coast, took home a scallop as proof that they had reached Santiago. The scallop also became a symbol of the Santiago de Compostela pilgrimage: like the ridges on a scallop, all the pilgrimage routes started at different places but ended at the same spot.

Today Santiago de Compostela is still packed with visitors–instead of Christian devotants with pilgrim staffs, they are backpackers and cyclists who have come for hundreds of miles on one of the various caminos de Santiago. And just as they did a thousand years ago, they all gathered in the cathedral at noon for the pilgrims’ mass. The priest offered a beautiful sermon in Spanish about devotion to God. Then masses were sung in Latin, and we all took communion.

Then came the part that everyone was waiting for. There was a huge incense burner suspended by a thick rope from the ceiling in the middle of the chapel. It was packed with incense and lit. Then a group of about six men pulled on the other end of the rope–like a pully–and hoisted the giant incense burner, called the botafumeiro, into the air. Then they started it swinging. It swung back and forth, longways through the cathedral. Then they let more rope out and got it swinging even further, so that it was swinging all the way to the ends of the cathedral! It was unreal!

And of course, the mass itself was very moving. The priest’s message was simple but rang true. And all the modern-day pilgrims, with their hiking boots, unwashed hair, trekking poles, had traveled hundreds of miles to hear it, and to partake in the spirit of pilgrimage.

So, on the subject of pilgrimage, I’ll never forget the words of my Jerusalem professor, Brother Seely, at the end of our four-month journey: “We came here for various reasons–academic learning, personal growth–but really we all came here to go on pilgrimage. And we’ve visited all kinds of holy sites, and this has been a pilgrimage through space. But you’ll come back to the Jerusalem Center twenty years from now and someone else will be sleeping in your bed. It won’t be the same. So it’s actually a pilgriamge through time. And you can’t go back. But the rest of your life will be different because you made this pilgrimage. And you’ll always remember it.” 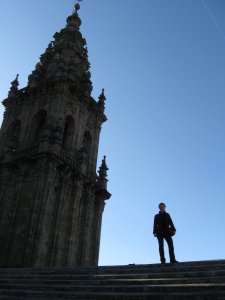